Last week I did a cleanse or ‘fast’ if you like. I have done these several times in the past and I must say: I like it!

Not only is a short fast easy, it is beneficial. I felt great and overcame some of my cravings….until today when I scarfed down a Moro bar and half a bag of pineapple lumps while my boys were out for a walk!!

Anyway, the cleanse consisted of the following regime:

Now this I struggled with as I found the texture unappealing and the longer it was in the water, the thicker it got.

I made the broth by boiling some carrots, potatoes, parsnip, onion, garlic, cayenne pepper and bay leaves together for 20-30 minute then strained and discarded the veggies. The cayenne pepper gave it a nice kick and it made me not want to have much.

3. Drink plenty of water/herbal teas in between “meals”.

I had 2 cleanse drinks and 3 servings of broth this day. I felt good and didn’t have an urge to eat. It was hard cooking for my family because mentally, I felt deprived but physically I felt good.

I thought the cleanse drinks would have me going to the toilet several times but I did not have a bowel movement at all!! So much for the colon cleanse!!!!

What was flowing muchly was my sinuses. I blew heaps of mucus out of my nose several times this first day. That was great for me but gross, I know.

Day 2 was much  like day one except I added a bit of brown rice (1/4 cup max) to my first bowl of broth.

I choked down 2 more cleanse drinks but still no poo! I did eventually have one but it was not as I thought…maybe not enough water!

I had a mandarin and a small dinner of fried rice with vegetables, egg  and shrimps. I found this made me more hungry than I had been when I wasn’t eating solids! I reckon the more I eat, the more I want to eat.

On day 3 I didn’t commit to doing the cleanse or eating. I neglected having breakfast because I figured this would set me off to eating solids all day. I had to go to town to use the internet so I ordered a soy decaf latte. I really enjoyed it and it satisfied me for a few hours.

I did have broth during the day but I didn’t have the cleanse drink; 2 days of that was enough. For dinner, I had a brown rice salad that included boiled egg, tuna, vegetables and homemade mayo.

Once Saturday morning rolled around I ate breakfast (rice flakes with banana and rice milk) and then I was back to eating solids as per normal but without going silly; that was reserved until today (remember my Moro and pineapple lumps….those lovely lovely lumps).

I did have an indulgence on Saturday but at least it was homemade so I knew the ingredients were of my choosing. It was raining  so I made a beautiful halva that warmed my soul for a few hours…..delicious.

The best thing about doing a cleanse is that I actually felt better! I lost the bloat and the heaviness that some foods bring to me. I do know that I need to let go of the foods that cause me grief but I’m just not ready to let go forever,  so a 2-3 day cleanse each fortnight may have to do until I get over the mental attachment I have with food.

I do not suggest everyone do this type of cleanse without  further investigation. I take responsibility for my own health and body. 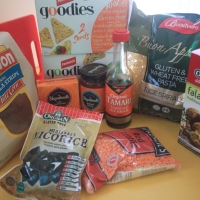