I love a good smoothie and in my household, at least one batch is made daily. If I’m in the city, I almost always get a smoothie from BOOST. My favourite is the Gym Junkie!!

However, I’m glad I don’t live near a good smoothie bar because these liquid lunches can be very expensive. When in Perth, I pay approximately $7.50 a pop. If I were to buy one each day that would be $52.50 per week or $2730 per year.

I’m sure there are some city slickers who ARE dishing out that kind of cash on smoothies. And better than blowing it on heroin but I am sure my homemade smoothies are much more cost effective.

Here’s what I do to save money on smoothies:

I saved $3.50 on this reduced tub of greek yoghurt. 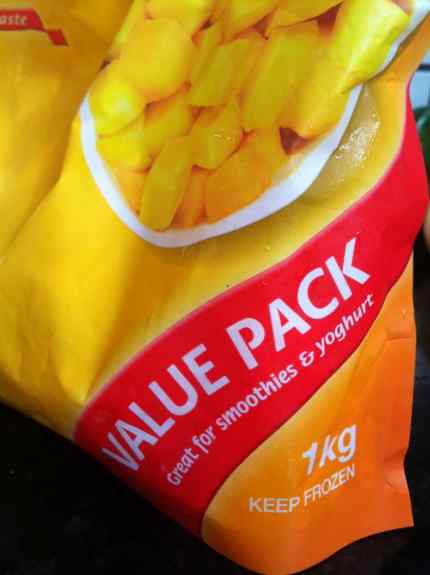 Yes, I skimp on ingredients but have a kick-ass expensive blender..lol

Do you buy smoothies or make your own? What’s your favourite combo?

Returning to Banff after an 11 year absence was not a mistake. Banff holds many beautiful memories for me and I was fortunate to call it home from April 1993 to January 1997. Returning was like a home coming.

The tourist town in Banff National Park, Canada’s first national park, has certainly developed over the years but the essence is still the same. Sure, it’s full of damn tourists but its beauty must be shared with the masses. I am happy to be in the presence of others while I enjoy its mountainous embrace.

I was not in a rush to get going on my first day. I had a nice sleep in and casual breakfast in the hostel kitchen. By the time I got off the bus on Banff Avenue, it was nearly 11:30am.

I meandered up the main shopping street, peeking in  windows and smiling at the towering mountains that surrounded me. My main mission was to find a coffee.

It didn’t take me long to stumble in to Evelyn’s – Banff’s main local cafe. It’s so popular, the town hosts 3 different Evelyn branches. I must say though, my decaf Americano was not the greatest. There are plenty of other cafes to experience.

From there, the shopping began. Yes, Banff is full of the tacky souvenir shops but some of them have really cool stuff. Like the onesie pjamas I got for Master T, my 6-year-old son.

At $30 plus tax, they were pricey for sleep wear but I couldn’t resist the one piece, bright red suit with the trap door!!! He’ll love the BEAR BUM print on the back. 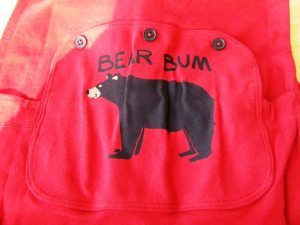 From there, I wondered up and down Banff Avenue stopping in shops, browsing and sometimes trying on clothing! I really had no intention of shopping but the shops and products are so enticing that I couldn’t help myself.

A typical shop on Banff Avenue

Besides some souvenirs, I bought myself a pair of Jessica Simpson red jeans. They were 40% off and they fit me nicely. When I did a couple of rounds in Cascade Plaza, I passed a bookstore that had a display of the popular book, Fifty Shades of Grey. I had heard about this book at the I CAN DO IT conference, of all places, and I was intrigued by the comments about it. I had never heard of it before. I stopped to have a read of the back and instantly took it to the counter and asked the staff if they had read it. Both had. The Aussie girl gave her no holds barred opinion saying it wasn’t great literature but it was a page turner and quite sexually charged and racy. SOLD. I love a good smutty book.

Back on Banff Avenue I found a shop I had actually planned to shop at, Rocky Mountain Soap Company. What can I say, it’s the usual handmade soaps, bath salts, body butters, moisturizers etc. It was lovely and the “product adviser” was excellent. I even got a free mini pumpkin soap. I also spent $45. oops. 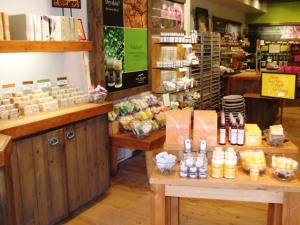 All that pacing and deciding made me hungry. My friend, Yui recommended I have a souvlaki wrap from Barpa Bill’s on Bear Street. When I arrived there at 1:30pm, it was not busy so I decided to eat in. I ordered the chicken and perused my new book as I waited. Ordering a wheat-based wrap that contains a dairy-based sauce would normally not be my first choice but I adore Greek food and since it came highly recommended, I had to have it. SO glad I did. Although I have no sense of taste or smell, the strong flavours of lemony marinated meat and the raw onions grooved all over my dulled taste buds like there was a dance contest in my mouth.

The humble kitchen of Barpa Bill’s 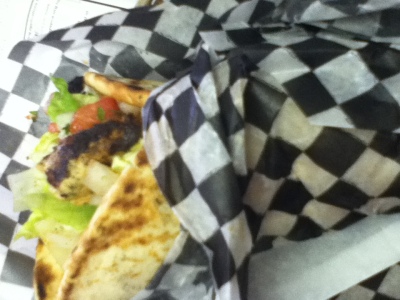 Satisfied and thoroughly spent (haha, pun intended!!!), I made my way to the Upper Hot Pools. I was stunned at the measly fee that was charged, only $6.20 with my HI/YHA membership. This is super cheap compared to the $23.50 NZD in Franz Josef, New Zealand where I just spent 7 months. The pool was a heavenly 39 degrees celsius. It was moderately busy with other tourists from around the globe. I spent a good hour or so soaking in the calm waters while the sun played peek-a-boo with clouds and at one point, it even hailed! Oh yes, it was apparent that I was in Canada.

Photo by a stranger…..thank you!

Next, I walked for 5 minutes to the gondola station. I had every intention of walking up Sulphur Mountain and saving myself $17 (it’s only $15 if you buy a one-way ticket) but it was already going on 5pm and frankly, I couldn’t be assed. I was far too relaxed after my hour-long hot tub session too. I grabbed a decaf coffee from Starbucks (yes, they are bloody everywhere) and had the entire car to myself. Of course, the camera came out and I took photos of the ride up, even though I knew once at the top the views would be spectacular!!

And they were. I nabbed the first available person to do a photographer swap. He took 3 of me and I took 3 of him, with his own camera, of course. It was cold and windy so I did the run around the circumference of the building, stood in the blowing snow for a few minutes (yes, it’s MAY and it snowed) then went to the cafe for a beer. For the $32 (after 4pm) fare, it was worth every penny. You just will not get the same visual effect from ground level.

The best view of Banff. 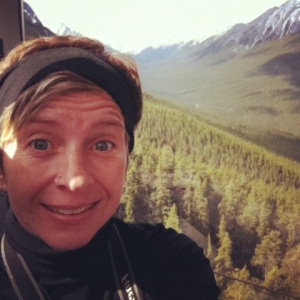 A self-portrait in the gondola

On my way back through town, I considered going back to Barpa Bill’s for dinner and that’s actually where I was headed when I strolled by the Magpie and Stump. This Mexican/Southwest pub and restaurant has been around for yonks and I’d certainly eaten here when Banff was my stomping ground. I glanced at the menu posted outside the entrance and made my decision: Mexican it would be – cheese, sour cream and all!!

I was promptly seated and ordered a traditional margarita. Why not, I thought? It came to me in a mason jar with a salted rim,,,yummy. I chose the bean and vegetable quesadilla to eat. I pulled out the BOOK and by the time my meal came, I was hooked. I read in between bites and sips of drink and with the John Butler Trio playing in the background, felt as though I could have stayed there forever. My waitress, Vanessa was friendly and attentive, so she got a nice tip…something that now erks me about North America. In the South Pacific, tipping is optional.

It may have been this sign that sealed my stomach’s fate!!! Too funny.

I did so much on my first day back in Banff. There is  still more to do in this town, like a visit to the Banff Springs Hotel…another day. If I can pull myself away from Fifty Shades of Grey that is……LOL!!